Ireland has a knack of throwing up diamonds, of which McBride most definitely is one…this boy’s going places – Hifi+

Simon McBride started playing the guitar when he was ten. By age 15 and entirely self-taught, he was good enough to enter Guitarist Magazine’s Young Guitarist of The Year, a performance competition staged at Wembley Conference Centre, which he won against strong competition. Even before that achievement, Simon was endorsed by the notable American guitar builder Paul Reed Smith, a relationship that continues to this day. Other PRS artists include Al Di Meola, Santana and Buddy Guy.

Observers of the blues-rock scene are calling Simon McBride the natural heir to Rory Gallagher and Gary Moore. Like these icons he hails from Ireland and from Moore’s hometown, Belfast. He is an astoundingly good guitarist, a fine singer and a prolific songwriter.

His first professional job – at age 16 – took him into heavy metal territory with the Belfast-based pioneering metal band Sweet Savage, who reformed in 1994 without their founding guitarist, Vivian Campbell (Dio, Def Leppard), who Simon replaced. Simon toured with the band and recorded two albums, Killing Time 1996 and Rune 1998.

After leaving Sweet Savage in 1998, He joined fellow Irishman Andrew Strong, who had made his name in the 1991 cult film The Commitments and went on to a successful singing career. Playing with Strong was in stark contrast to Sweet Savage. As Simon says, the change of musical style was a useful and enjoyable learning experience. He spent six years touring with Strong before leaving to pursue the idea of a solo career.

Simon then spent several years playing with bands local to Belfast while writing songs and honing his production skills. His strongest influences have been players from a Blues and R&B background, guitarists such as Hendrix and Jeff Beck, so not surprisingly that is where his solo career became focused.

In 2008 Simon approached Nugene – notable for handling guitarists and blues artists – with a collection of songs that became his debut album, Rich Man Falling (“Hugely accomplished” MOJO. “Blues Rock Par Excellence” CLASSIC ROCK). The band was targeted initially at continental Europe and with representation by Live Nation in the Netherlands Simon played major festivals. In the UK he has supported Jeff Beck, Joe Bonamassa, Joe Satriani and Derek Trucks.

Then followed a second album Since Then (“there is a new star on the horizon” Guitar Techniques. “Ireland has a knack of throwing up diamondS” HIFI+). In support of the album Simon toured the UK opening for guitar legend Joe Satriani and earned rave reviews for his performances.

In 2012 he released Nine Lives, an album of mostly live recordings proving that on stage he can make a sound every bit as good as his studio albums. He delivers powerful renditions of songs from his two studio albums together with a previously unreleased song (Fire Me Up). The album also carries four bonus tracks in which he reprises songs in a stripped down acoustic format, demonstrating just how natural a guitarist and singer he is.

Then in 2012 came the album that cemented his place as “among the best blues-rock players in the World” (Guitarist magazine). Crossing the Line distills Simon’s blues and rock influences into a collection of ten original songs and a superbly crafted cover of Blood, Sweat & Tears ‘Go Down Gamblin.’ On hearing the album American magazine ‘Performer’ was prompted to say “The Holy Trinity of Belfast rock ‘n roll – Van Morrison, Rory Gallagher & Gary Moore – might just be on the verge of becoming a four-leaf clover.”

After taking time off for the arrival of his first child, Simon recorded with Don Airey (Deep Purple) following in the footsteps of Joe Bonamassa, who was guest guitarist on Don’s previous album. Simon’s contribution includes a special medley of songs in tribute to the late Gary Moore.

2016 sees Simon working on a new album. Meantime help yourself to the free downloads on Simon’s web site. 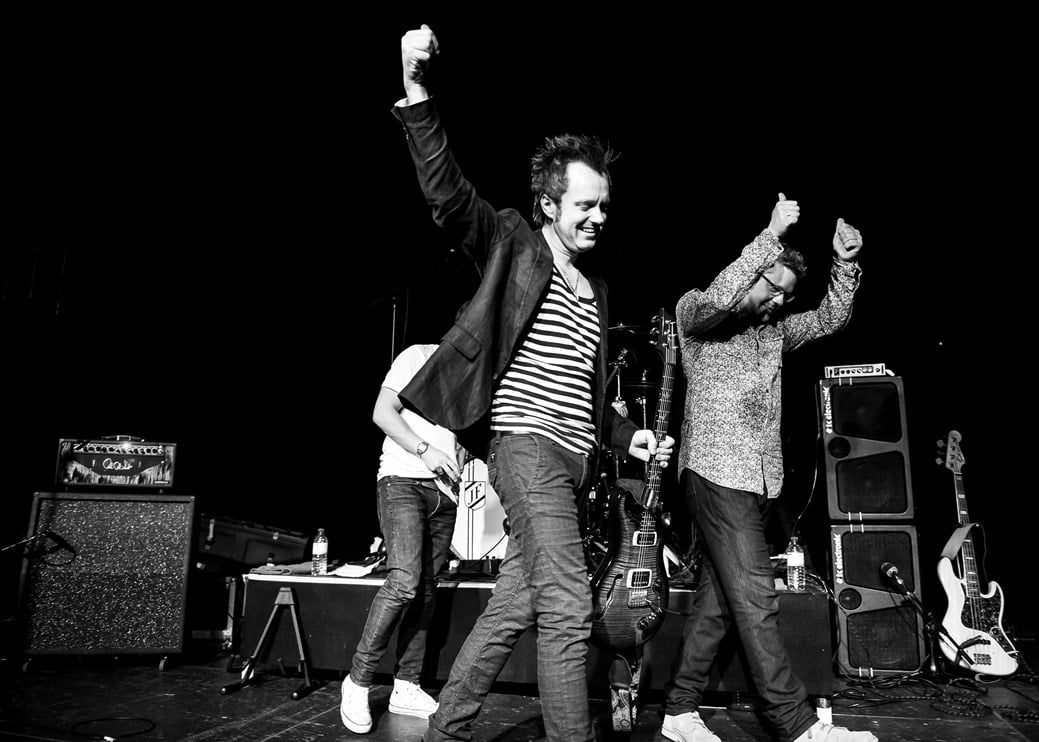 Simon McBride at the Store