An evocative snapshot of a special night of dry banter, salty tales and classic songs performed with industrial-strength charisma by two artistes at the top of their game.

Available only as CD

Wayward Sons is an evocative snapshot of a special night of dry banter, salty tales and classic songs performed with industrial-strength charisma by two artistes at the top of their game. This atmospheric album places the listener squarely in the midst of the crowd as they cheer the Anglo-American duo through a diverse set of self-penned songs and classics from the book of Americana.

One night. Two troubadours. In the autumn of 2014 on their first tour together, Ian Siegal and Jimbo Mathus rolled into the sleepy Dutch town of Hoogland. They pitched camp at Café De Noot, which despite its parochial name has been hosting international touring artistes for more than 20 years. What followed was a special night. The set might so easily have been lost into folklore, kept alive only in the memories of the fans that packed the venue. Thankfully, somebody thought to hit ‘record.’

Let’s have some introductions. Ian Siegal is the much-decorated British national treasure whose album catalogue and firecracker shows have earned him eight British Blues Awards, three European Blues Awards and three US Blues Music Awards nominations, most recently in the 2016 BMAs for Acoustic artist of the year. Add to that haul, two Best Blues Album awards from Mojo – the best-selling British music magazine adding that his work is “awash with wit, lust and distraction” – and you’ll understand the crackle of anticipation in the Café De Noot that night.

In the opening words of Siegal himself, Jimbo Mathus is “a very talented man”. Or, as the Briton adds later: “That’s a superstar you’re looking at right there”. Both descriptions of the Mississippi songwriter and multi-instrumentalist are right on the money. Mathus broke out with the genre-blurring Squirrel Nut Zippers, whose iconic album 1996’s Hot led to a set at the second inauguration of President Clinton. Since the millennium, Jimbo jas tracked with Buddy Guy, led The Tri-State Coalition and forged a solo career.

Even in the age of auto-tune and Pro Tools, you can’t fake chemistry – and Wayward Sons proves the Siegal/Mathus partnership has it in spades. The pair’s friendship goes back to 2013, when Mathus contributed banjo and mandolin to Siegal’s acclaimed album, The Picnic Sessions, recorded in Mississippi. Despite hailing from opposite sides of the Atlantic, the two men found they shared cultural touchstones, not to mention a rare musical understanding that bleeds into Wayward Sons. Siegal’s acoustic and slide guitar dovetails with Mathus’ mandolin, harmonica and kazoo. Vocal harmonies lock horns. “You can tell we’re ragged,” notes Mathus, after a stunning run through of I’ll Fly Away, “but we’re right.”

This standout show from their first tour together also finds the duo’s banter on whip-cracking form, whether that’s Siegal claiming to be the mayor of Hoogland, or Mathus wryly reminding us that he’s still very much alive. “I’m sorry that the people at the back can’t see our beautiful faces,” drawls Siegal in one memorable aside. “You’re missing out on a treat, I can tell you. Because we are two very handsome men, trust me.”

Whether or not that’s true, Siegal and Mathus are undeniably stellar live musicians, racing through a set list that airs a fistful of classics from their respective catalogues, as well as some rip-it-up reboots of old standards.

Until they roll into your town, Wayward Sons is the next best thing, catching the sparks, bottling the bonhomie and making your front room feel like the front row. These 21 tracks might stretch the 74-minute capacity of a CD to its limits – but even after the encore, you’ll be calling out for more.

Note: The CD of this album contains five tracks of conversation which are not sampled here. 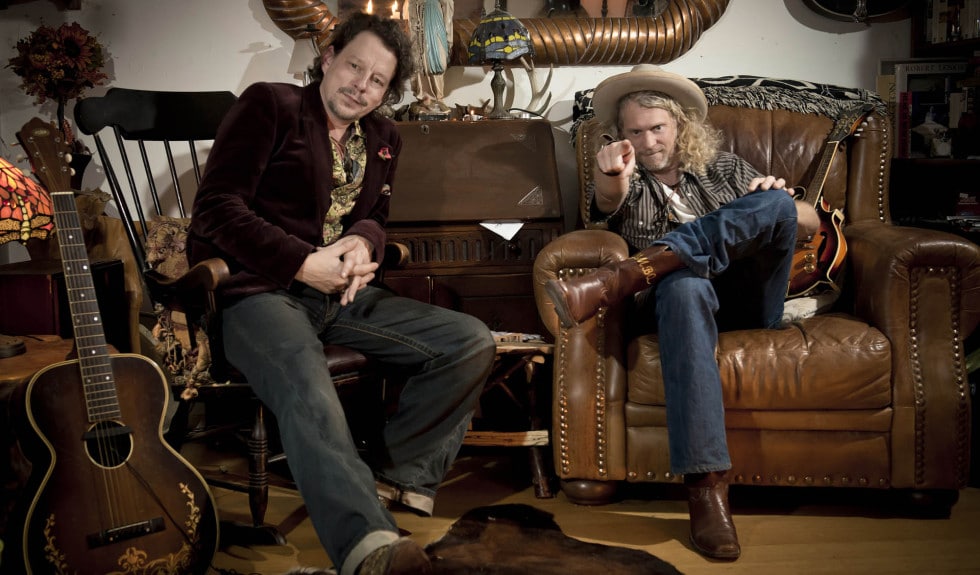